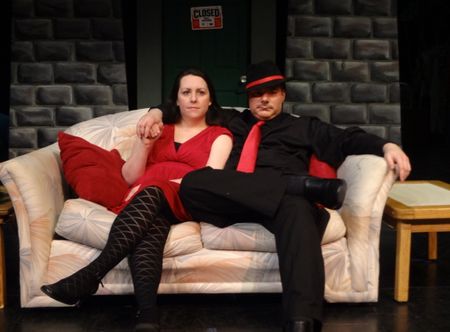 Adam C. Sharp and Jenn Sharp in an original dance, "How We Met" conceived by Adam C. Sharp and choreographed by Amanda Reese and Mikayla Daniels. Premiered at Scenes of Life: Living at the Moment. Spokane, WA (2012)

A Cloud of Victims

Through All the Tomorrows

In Darkness Without Fear

“The Devil May Call”

"The Eruption and the Baby"

"The Customer is Never Right"

SYNOPSIS: 7 People. 7 Days. One Chamber. Everything Can Change.

In the future we have the ability to send seven experts in various fields of study (mathematician, physicist, chemical engineer, philosopher, historian, artisan and sociologist) to a Chamber where the elements in the surroundings connect to their brain waves to predict the global future. But, this time, when a new group of experts meet they may be able to not only predict, but directly influence the future. Many ideas and questions are explored as well as the relationships between the characters. 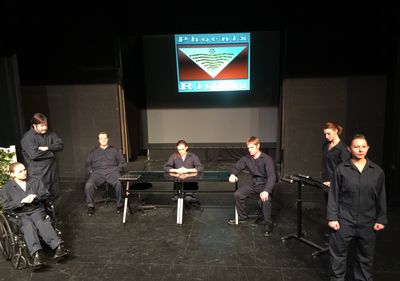 A Cloud of Victims

SYNOPSIS: A secluded island hotel room becomes the stage for six people to discover their cares, fears and true selves. Sam and Connie took this important vacation and soon found that the hotel became overrun by terrorists. While trying to stay safe in their room they are joined by other victims of the raid: the older lovers, Leon and Silvia; Steve; and finally Melody. In this room, each discovers the truth about him/herself and finds comfort and frustration with one another. But, they must also battle with the impending danger outside the room and some may need to make a fatal decision which will affect them all. 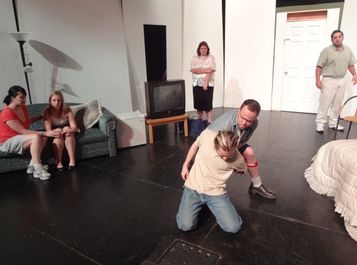 (From Left) Mikayla Daniels, Marcie Summers, Dixie Sampson and Chris Bastible. (In Front) Matthew Williams and Brad Laird in A Cloud of Victims (2012)

Through All of the Tomorrows

SYNOPSIS: The Earth can no longer sustain life. Many ships are sent to find an inhabitable planet. This is the story of one ship. As the story begins, one of the crew members was left for dead on the planet they finished examining. Now, the crew must continue their mission. The only problem is who left him there and why? When a startling discovery occurs the crew must face their fears and responsibilities that are much bigger than any of them expected.

In Darkness Without Fear

SYNOPSIS: This dark and frightening play is for mature audiences only. Molly invites Drake into her house after he tells her he is being chased by a bear. Soon, the conversation turns into a hunter and prey situation between the two of them. Next, we discover the root of Drake’s crime. Filled with twists and turns through the various confrontations, the audience will be guessing until the explosive ending. 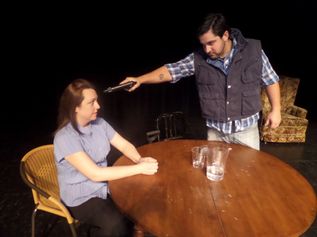 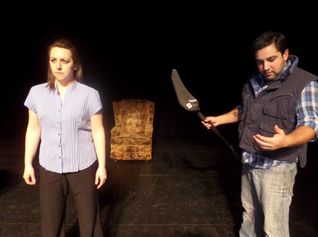 Jenn Sharp and Chris Bastible in In Darkness Without Fear Directed by Adam C. Sharp at Spokane Community College (2014)

Set: The look of a front yards with a fence and a mailbox

SYNOPSIS: Who doesn't want a beautiful lawn? But, what if there was a section of grass where you shared the lawn with your neighbor and he mowed it days before you mowed your grass? George must defend his front yard and his wife's honor all before eating his morning soy bacon breakfast And, his enemies and allies slowly become clear to him in this modern day farce. 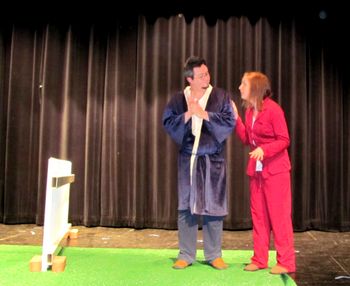 SYNOPSIS: In this expressionistic play, four women who are victims of a form of abuse from their husband or boyfriend share the same dream where each must face her own fear when confronting her individual abuse. 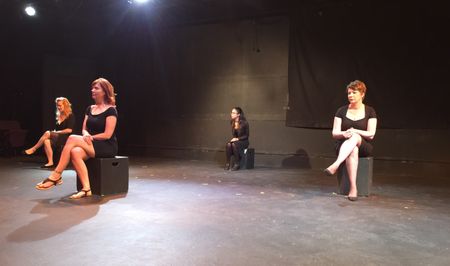 SYNOPSIS: Haley, a young woman in her early twenties, is sitting on a bench at a rest stop when Vik, her boyfriend who is also in his early twenties, comes to the stop. Together, while at the low point in their lives, they discover that Haley may be pregnant. Now, they must decide their future and if they will stay together or call it quits. 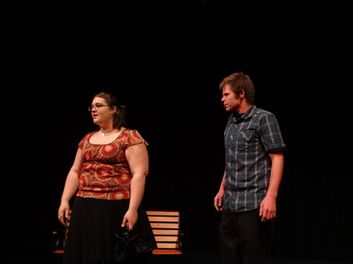 "The Devil May Call"

Set: Outside seating area of a restaurant

SYNOPSIS: Joe meets Heather at a restaurant because she has information about his extramarital affairs. And she is willing to make a deal with him in exchange for not telling his wife. But, there's more to the scheme than what appears. 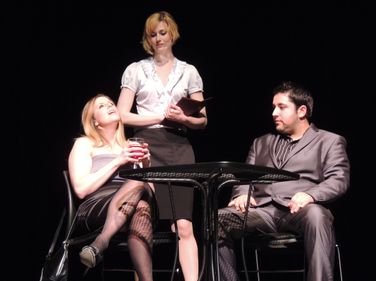 Chris Bastible, Elizabeth Carrigan and Cherise Marshall (behind) in "The Devil May Call" Directed by Brad Laird at Spokane Community College (2013) 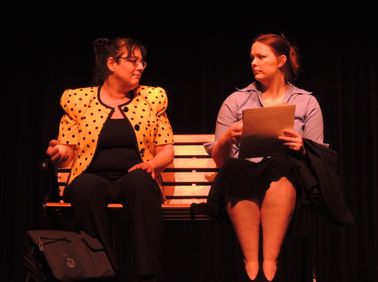 SYNOPSIS: A man and a woman self help writers are both accidentally scheduled to give a talk at a bookstore at the same time. But, we soon learn that they may know each other and we will learn more about their relationship than we realize. 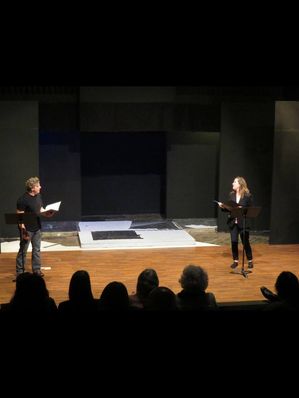 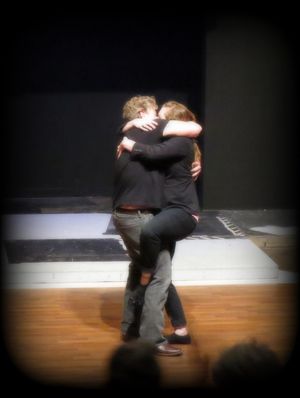 "The Eruption and the Baby" 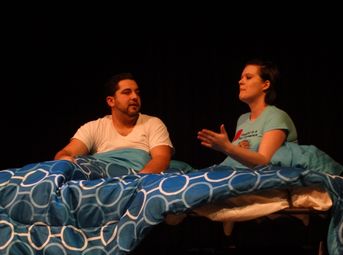 SYNOPSIS: What really goes on in a director's mind during a rehearsal to escape the stress of the actors and crew? Your audience will be laughing in the aisles with this short, fun comedy. 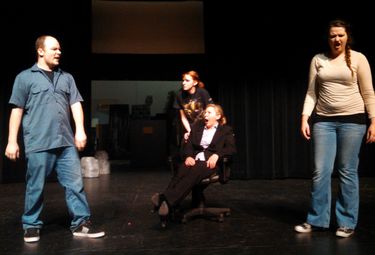 SYNOPSIS: Two friends discuss their difficulties as each reveals their biggest personal problems while they exercise together. 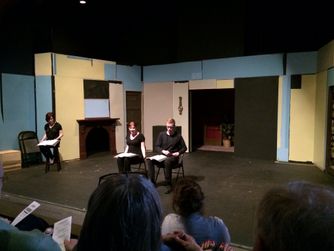 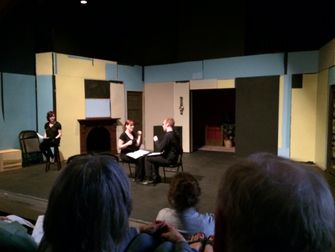 Kandyce Carrcallen and Nick Wittman in a Staged Reading of "Excorsizing Together" at Ignite! Theatre Third Annual Booklight Series.

"The Customer is Never Right"

Set: Minimal (Could have nothing) 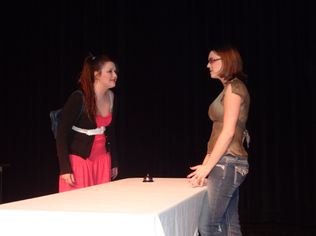 SYNOPSIS: This story reveals the secret behind the four rivers in China. We follow the selfless acts of the four dragons (Long Dragon, Yellow Dragon, Black Dragon and Pearl Dragon) and how they pay for disobeying the Jade Emperor.

Added to Teach for Friendship as an educational resource 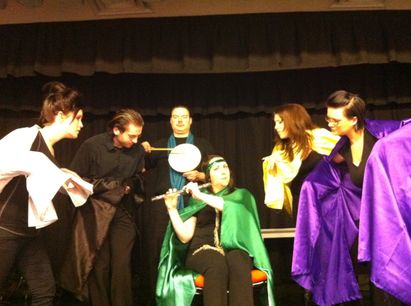 SYNOPSIS: Jack is a just lying around when his mother decides that it's time that he finds a job. So, he tried to find many jobs and is given many gifts, but he can't seem to hold onto the gifts he is given. But, his mistakes may lead to positive results.