Back to all posts

A World Full of Secrets by A.C. Sharp

The time has come...

to release another A.C. Sharp album.

Join Mister Ace as he faces against Cash Jack in this action-packed soundtrack for a film that does not exist. Let yourself go as you imagine the adventure, the heist, the double-cross and the action as you follow Agent Mister Ace face off with Criminal Cash Jack.

Here is the synopsis:

The opening titles A World Full of Secrets sets the scene of intrigue where we see the preparation of a secret agent and a criminal. We see a man in sunglasses and who caries a katana, Enter Mister Ace as he checks in to find his next assignment at the beach post where he discovers the secrets to a heist that is to take place of the laser, the reflective diamond that, when a laser hits it, can be redirected and intensified to destroy everything in it’s path. The heist takes place and all the witness see is a man in a mask. The diamond is stolen, and no one knows because it was replaced by A Sophisticated Forgery. Mister Ace then reaches the lab where he sees the forged diamond. He recognizes the marking left on the forged diamond as Cash Jack, the masked man who wants to dominate the world. Cash Jack demands One-hundred million dollars for the diamond. Mister Ace is suspicious but goes along with what his superiors tell him. Mister Ace watches as the switch is made in an airport, but notices that there was A Double-Cross in Lag-Time because the lay-over is short and that the diamond that is traded for the money is another forgery.

Mister Ace has to take matters into his own hands and decides to go undercover as an agent working for Cash Jack as he realizes that Cash Jack intends to rob a bank and steel the most power laser ever made. Mister Ace does not tell his superiors and joins Cash Jack to Take, Stack, Go and heist the laser and the money. Cash Jack tests Mister Ace’s loyalty by asking for the codes for the laser guidance system. He decides to lie, but Cash Jack already knows Mister Ace is lying and it is A Slip of the Tongue that makes Cash Jack realize Mister Ace is actually an agent. Mister Ace tires to escape, but after a long fight there is The Capture of Mister Ace.

Actually, Mister Ace wanted to be captured to be alone in the cell. He is able to escape the cell and use his ability to reprogram the laser through the Memory Tracks in the guidance system. After reprogramming the laser he needs to take back the money and the diamond. The money is only digital. He asks to connect to the agency and tell them to trust him. Through Decisive Intelligence, Mister Ace can transfer the money back to the bank and crash Cash Jack’s system. Right when Cash Jack was to test the laser on the diamond, the laser blows up because of Mister Ace and Ace takes the diamond in the confusion. Angry, Cash Jack attacks Mister Ace with all his firepower and manpower in his base. Mister Ace and Cash Jack fight, but Mister Ace ignites explosives to the computer system which begins to blow up the base. Cash Jack is injured as Mister Ace Escapes on Cash Jack’s personal jet.

Mister Ace flies away as the base blows up in flames. Mister Ace brings the diamond back and the agency realizes he wasn’t a double agent. Instead he is True Blue. 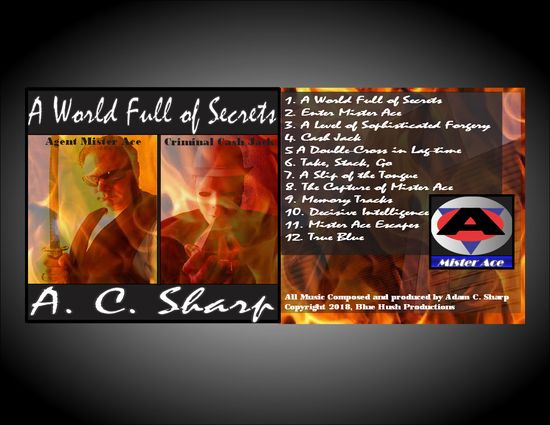